No Arguments: Arabic Debate Team Among the Top Eight

The mere mention of public speaking reduces many to tears: sweaty palms and dry mouth, anxiety levels off the charts and the deafening silence that soon follows when the brain refuses to cooperate. Cue the panic attack.

Now, imagine debating in Arabic and at your first international competition against teams of native speakers in front of an audience of hundreds.

Oh, and you are on a team that formed less than a year ago.

This is what the Duke-UNC Arabic debate team faced this summer — and it walked away with a top-eight finish. 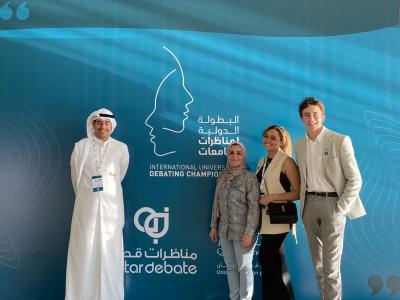 It all began in October 2019, when Duke was invited to compete at the inaugural United States Universities Arabic Debating Championship (USADC). The only problem was Duke didn’t have an Arabic debate team.

Maha Houssami, lecturer of Arabic languages and interim Arabic program coordinator in the Department of Asian and Middle Eastern Studies, took the lead and quickly formed a team of four students to send to the three-day competition at Harvard University.

Organized by QatarDebate Centre and co-hosted by the Society of Arab Students at Harvard, the first USADC welcomed 22 universities that fall. While the Duke team did not perform as well as hoped, the experience laid the groundwork for future competitions and teams.

The pandemic cancelled the 2020 USADC, but Duke was invited back the following year to the national competition held at the University of Chicago.

Two graduation cycles had depleted most of the original team, so Houssami formed a second iteration with her third- and fourth-year Arabic students. The team made the trek to Chicago in November 2021, where 40 teams from 35 U.S. universities competed.

Although Duke was knocked out in the semifinals, it did qualify for an invitation to the 6th International Universities Debating Championship (IUDC) held this past June in Istanbul, Turkey.

“The team that went to Istanbul had a great dynamic,” says Houssami.

“The students complemented each other well, building on the diverse experiences that they acquired at Duke, as well as the individualized attention in the Arabic classes, where the smaller class sizes helped to maximize their potential.”

Captain Majed Al Munefi led the team. The sophomore Electrical and Computer Engineering and Computer Science double major, who is also completing a certificate in Markets and Management Studies, is no stranger to debate.

He co-founded his high school team in eighth grade. The team went on to win the Jassim AlKharafi Arabic debating competition in 2019, where he picked up an award for best debater.

Al Munefi is also the former captain of the Kuwaiti national team that reached the IUDC semifinals 2021. He has been an active member of the international debating community, and connected with Houssami at Duke. The two got to work forming the team that would travel to Istanbul.

Representing UNC on this Duke-UNC team was Jasper Schutt. Schutt will earn a bachelor’s in cultural studies and global studies in 2024, with career goals in antitrust and economic policy and translation.  But until 2021, he had no background in debate — English or Arabic.

“I thought joining a debate team would be a good way to meet new people and engage with the language at a higher level,” he says.

He captained the UNC team at the 2021 USADC in Chicago, a team Houssami also helped assemble.

After taking several courses at Duke, including Houssami’s Arabic classes, and working with her on the road to the USADC, she recruited Schutt to join with Duke’s debaters at the IUDC.

The team’s longest-serving member, Danah Younis, graduated in 2022 with a bachelor's in Public Policy and minors in Arabic and Chemistry. During her sophomore year at Duke, Houssami contacted her to gauge her interest in joining the newly formed team heading to Harvard.

“Although we didn’t do too well during our first year competing, the anxiousness and high pressure of the Boston competition left me excited for the next and dreaming of the international competition,” says the healthcare consultant who plans to do a master’s in public health before becoming a physician.

The road to Istanbul

To prepare for its first international competition, the team practiced — a lot.

Separated by location (Jordan, Kuwait and Egypt), they ran drills on Zoom for specific skills like providing definitions and refutation. They held mini debates, giving each other feedback on content and style, and listened to countless recordings of matches.

Younis, still stinging from the semifinal loss in Chicago, would analyze what the team could have done better.

“I searched past prompts, practiced preparing for them in 20 minutes and spent time speaking Arabic to anyone who would listen,” she says.

She was the team’s first speaker, a position that she loved, and was key to setting the tone for the rounds.

“Sometimes, I felt that it was a lot of pressure, since we only had 20 minutes of prep time,” she says. “However, being first speaker was extremely exciting and allowed the pressure of my actual speech to be off for the rest of the debate, giving me the time and space to think of rebuttals and questions for the other team.”

Schutt served as the team’s third speaker, tasked with summarizing what had been said in the debate and reaffirming arguments and refutations.

“The teamwork and harmony were definitely the key factors for us reaching semifinals, and the team structure was perfect. Every member brought his or her own background and knowledge,” Al Munefi says.

“For example, when we talked about free trade, Jasper [Schutt] gave me a short lecture that made me understand an economic term that I had never heard of before — in less than ten minutes.”

In qualifying rounds, Duke-UNC won four of its five matches, debating topics from effective strategies for judicial reform to the cultural influence of streaming platforms in the Middle East and North Africa regions.

After a close win against Al-Najah National University in Palestine, debating whether employment rates should be prioritized over unrestricted development of technologies that have the potential to create joblessness, the team was defeated in the quarterfinals by Texas A&M Qatar, the eventual champions.

“Despite losing that quarterfinal match, we put up one of our strongest performances of the competition,” explains Schutt.

The team did not bring home the championship, but it did bring home several accolades. Al Munefi was named seventh-best speaker for the competition and recognized as the best speaker in the majority of the Duke-UNC matches.

Schutt was named the third-best non-native speaker in the championship.

“And more important than the awards,” Schutt says, “was the role Danah Younis played.

“She’s been with the team since its beginning at the first U.S. Universities Arabic Debate Championship in 2019. She laid the groundwork for this team’s success, both in her longstanding commitment to debate and her essential role as the team’s first speaker.”

“The organizers, adjudicators and competing teams were impressed that our team could compete at the same level as native speakers from native countries. This isn’t often the case for teams from the United States,” Houssami said.

Of the more than 90 universities competing, only two teams from the United States reached the final eight: Duke and the University of Chicago.

Houssami credits the Duke Arabic program’s seasoned faculty for providing the confidence in the language and intercultural competence that gave the Duke-UNC team an advantage.

“The communicative approach adopted in our program prepared the students to convey their arguments effectively to diverse audiences when debating topics at higher levels of complexity,” she explains.

Without studying Arabic at Duke, Younis believes she never would have been able to be on the debate team.

“I needed the understanding of Modern Standard Arabic, the vocabulary and the grammar to express my thoughts and effectively communicate.”

QatarDebate is currently planning for the fall 2022 USADC, and Houssami is gathering a team to compete. Students interested in joining the Duke Arabic debate team are asked to contact team captain Majed Al Munefi.