More than one narrative: Duke Libraries' 'Land of Lapis lazuli and Gold' exhibit works to expand awareness of Afghan culture 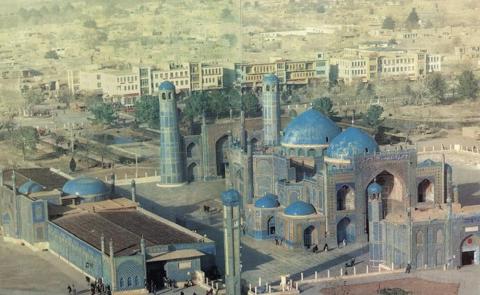 By Ben Smith of The Duke Chronicle

Walking into Perkins or Bostock Libraries, one might pass by the display cases on the way to their study spot without a second thought. However, those display cases are almost always arranged with rich collections of artifacts.

One such exhibition, titled the Land of Lapis lazuli and Gold: Afghanistan in the Collections at Duke University Library, is currently on display in the International and Area Studies exhibit space on Bostock’s second floor from Dec. 1, 2021 until Dec. 31, 2022. The librarians of the South Asian and Southeast Asian departments began collating materials for this exhibit following the evacuation of the last US troops from Afghanistan in August 2021 and the resurgence of the Taliban.

Sean Swanick, a librarian for Middle East, North African and Islamic Studies, wanted to add more context to contemporary narratives through a more holistic exploration of Afghanistan’s culture and history.

“With the U.S.-led withdrawal in August, there was a lot of negative news [surrounding Afghanistan],” Swanick said, “so the idea of this exhibition was to show that the history of Afghanistan goes beyond just occupation, beyond an occupied country or a country of terrorism, but actually is a country that has an immense amount of diversity and a very long history that we should focus more [on].”

Within the exhibition, there are a variety of artifacts ranging from millennia-old Persian poetry in “The Mirror of My Heart: A Thousand Years of Persian Poetry by Women,” to a rug depicting United States and USSR invasions and the ensuing strife. Another interesting aspect of the exhibition is the selection of Duke doctoral theses on the Afghan region. One of these theses dates back to 1973, well before the International and Area Studies department was founded in 1991.

Perhaps the most striking images are those of the Kabul River from the early 20th century. Afghanistan is often perceived by western eyes as a war-torn dustbowl of a nation, yet these images, such as “Looking across the Kabul River, showing ferry,” tell a different story. There are 40-50 languages in Afghanistan, with over 2,000 years of trade and imperial influences passing through it. There are rich rivers and incredible deposits of natural resources, hence the exhibit’s name.

While there must be a recognition of the sadness and trauma experienced in the Afghan nation, images such as the one depicting the Kabul River illustrate the rich, complex cultures and experiences present there.

Swanick remarked about the singular narratives that were told by American journalists during last August’s withdrawal, saying that “[he] remembers journalists talking about Afghanistan being a dustbowl, which is not true… That [might] be Helmand Province, but you should look a bit further to the snow-capped mountains and the lakes in the entire country.”

This rich history of scholarship speaks to the long-standing tradition of study relating to South Asia that exists at Duke, which was largely created by Avinash Maheshwary, who was the first librarian specializing in the subject. During his tenure, Maheshwary, who retired over a decade ago, built the South Asian collection from nothing to a store of thousands of artifacts and books in all the many languages of the region. Also under his tutelage, Duke developed a shared collection of South and Southeast Asian goods with UNC-Chapel Hill, creating opportunities for students at both institutions to expand the learning and discussion of the region.

Unfortunately, following Maheshwary’s retirement and his successor’s departure, the South and Southeast Asian department has been left without a coordinating librarian. While the department has managed through the efforts of Swanick, Luo Zhou, and Dr. Erik Zitser, there have been difficulties in expanding the collection, due to the interim nature of the positions and other factors involved. Between Duke, UNC-CH, North Carolina State University, there are about 10 Ph.D. students working on various aspects of scholarship on South and Southeast Asia, who Zhou believes would benefit from having more departmental support and specific contacts.

The current exhibition on Afghanistan is just one of many exhibits presently on display with the Duke Library system, which also includes the Nuestra Historia, Nuestra Voz: Latinas/os/es/x en Duke exhibition in the Jerry and Bruce Chappell Family Gallery, which speaks to the experience of Latina/o/x students at Duke University, for which there will be an exhibition opening event Monday, Feb. 21 from 4 p.m. - 6 p.m. “The Land of Lapis lazuli and Gold” exhibition will continue to be on display until the end of 2022.

Orginal post can be found here on the Duke Chronicle.