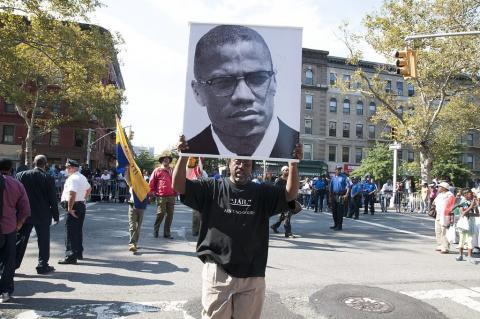 In April 1957, Malcolm X began writing his “God’s Angry Men” column in the New York Amsterdam News, immediately after the brutal police beating of Hinton Johnson. The paragraphs of his June 1st column end with the refrain “White Man’s Heaven Is Black Man’s Hell”—the title of a song Louis X, later Farrakhan, recorded on vinyl in 1960. Farrakhan studied, worked, and served under Malcolm, “enough time for him to incorporate Malcolm’s oratorical style into his own,” writes Manning Marable. Both sampled Elijah Muhammad’s teachings in a call and response that played out in music and print. Farrakhan maybe channeled Malcolm’s words into song, or Malcolm perhaps wove an early, unreleased version into his writing. Regardless, Malcolm X inspired what Richard Brent Turner calls “the soundtrack to a movement,” but also used “music in his message.” Public Enemy titled their 1994 album “Muse Sick-n-Hour Mess Age,” reinterpreting Farrakhan’s song as “White Heaven/Black Hell”—on the eve of Farrakhan’s Million Man March and during the 1990s resurgence of Malcolm.

Malcolm wove gospel music into his June 1st column, during a time music was nearly banned in the Nation of Islam—and gospel was becoming a critical instrument of the civil rights movement. The NOI forbade music careers at the time, though “Islamic-inspired gospel songs” were allowed. Eventually, Louis X was able to record “A White Man’s Heaven Is a Black Man’s Hell” and other songs like “Chains” and “Black Gold.” “Music for emancipation,” Hisham Aidi observes, “is permissible.”

Malcolm drew on Elijah Muhammad’s teachings in developing his public voice, but also experimented with the rhetorical style of civil rights leaders. In April 1957, Martin Luther King wove the spiritual “Free at Last” into his “Birth of a New Nation” sermon—referring to Kwame Nkrumah’s inauguration that he had just attended in newly independent Ghana. (This language resurfaced in “I Have A Dream.”) Like Elijah Muhammad, Malcolm used Biblical imagery to call for emancipation from racial slavery; unlike him, he deployed gospel music as a mode of political protest.

The Autobiography testifies to the deep influence of music on Malcolm’s development, through his euphoric and exuberant participation in the music scene while working at the jazz bar Small’s Paradise in Harlem. In Haley’s treatment, the vibrant music fades with Malcolm’s asceticism after his conversion, although the conversions of jazz musicians and musicians like Farrakhan paint a different picture. In 1961, Malcolm X attended Ossie Davis’s musical Purlie Victorious for a Congress of Racial Equality benefit—an “unlikely alliance” rooted in shared understandings of “artistic rebellion as the cultural arm of political revolution,” connections orchestrated under the radar of Elijah Muhammad’s watchful eye.

In the June 1st column, Malcolm uses the gospel song “Steal Away” to evoke the suppression of “knowledge of the God (Allah) and religion (Islam) of our foreparents” under slavery. “When we wanted to pray to our God (the one God, ALLAH), we had to ‘steal away’…White Man’s Heaven…Black Man’s Hell.” Malcolm uses the song to describe fugitive pedagogies, but also the free practice of African religion—with implicit reference to NOI separatism. Sung by the Fisk Jubilee Singers, the Soul Stirrers, Mahalia Jackson and Nat King Cole (on his television program in 1957), and Sam Cooke, “Steal Away” was the anthem of the Montgomery bus boycott. In Souls of Black Folk, DuBois called “Steal Away” “the song of songs.”

These gospel references testify to another kind of call and response—with the civil rights movement, as Malcolm X repeatedly sought rapprochement with its leaders, despite Elijah Muhammad’s prohibitions: inviting King to the Harlem Freedom Rally in 1960, attending the March on Washington in 1963, and making overtures through his Organization of Afro-American Unity. In 1957, Malcolm was “fishing” for converts for his Mosque No. 7 in Harlem—from Adam Clayton Powell’s Abyssinian Baptist Church and Pentecostal churches. Expressing the frustration of waiting for freedom, the column weaves lyrics from The Famous Ward Singers’ 1957 “Oh Lord, How Long”—a group with both Baptist and Pentecostal members. (The lead singer Clara Ward, the companion of C.L. Franklin, mentored Aretha Franklin.)

The reverberation of these gospel songs functioned as a contrapuntal critique of both the civil rights movement and Christianity, even as Malcolm tuned in to their register. “The Christian Slavemaster…made up a ‘new religion’ (Christianity), and put Jesus’ name on it to fool us, telling us we would get our heaven (Freedom) after we die, ‘way up yonder in the sky’… ‘after we die.’ While at the same time our slavemaster himself was getting his heaven on earth, now, in this life. White Man’s Heaven Is Black Man’s Hell.” The promise of heaven after a hell of toil became the essence of Farrakhan’s critique: “the preacher…told us of a heaven way up in the sky/ That we can’t enjoy now, but rather after we die.”

Malcolm quotes lyrics from “When the Roll Called Up Yonder,” published in Billy Graham’s Crusade Songs hymnal, from his “New York Crusade” beginning May 15, 1957 and continuing for a full sixteen weeks. Graham invited King to join him at the pulpit, which he did in July. Without naming him, Malcolm calls King “the Number One tool of the white slavemaster…the black preacher who preached the slavemaster’s Christian doctrine: ‘Love your enemies.’” The song’s lyrics to illustrate this point: “Let us labor for the Master from dawn till setting sun/Let us talk of all his wondrous love and care/Then when all of life is over and our work on earth is done/The roll is called up yonder.”

At the May 17, 1957 Prayer Pilgrimage for Freedom, King quoted “love your enemies” (from Matthew 5:43) and called for rejecting “a philosophy of black supremacy.” In the wake of the brutal beating of Hinton Johnson, passive resistance must have seemed untenable to Malcolm. (That June 1st issue of New York Amsterdam News also included an article “King Emerges as Top Negro Leader,” which must have rankled.) The Prayer Pilgrimage aimed to pressure the government to enforce Brown v. Board of Education on its third anniversary—featuring Mahalia Jackson performing gospel songs “I’ve Been Buked and I’ve Been Scorned” and “Keep-A-Trustin.’”

Malcolm’s column begins with knowledge, education, and teaching suppressed under racial oppression and slavery: “our children, with no one to teach them, no one to open their eyes, grew up blind, (mentally) in gross darkness (ignorance)…‘mother gone, father gone, motherless children saw a hard time.’ White Man’s Heaven is Black Man’s Hell.” The lyrics were from Blind Willie Johnson’s gospel blues song “Motherless Children” that Folkways re-released that year. The description of Johnson’s “motherless” childhood perhaps resonated with Malcolm’s loss of his own mother to a psychiatric institution.

Through Biblical motifs of being deaf, dumb, and blind (e.g., Exodus 4:11 and Isaiah 42:18)—and allusions to Johnson’s blindness—Malcolm calls Black Americans a “God’s people” who fell into the clutches of “beast-like people, who robbed them deaf, dumb, and blind and then made slaves of them (Daniel. Chap 1).” The column directly quotes Elijah Muhammad’s 1957 Supreme Wisdom: Solution to the So-Called Negroes Problem: God “declared that we were without the knowledge of self or anyone else, and had been made blind, deaf and dumb by this white race of people and that we must return to our people, our God (Allah) and His Religion of Peace (Islam).” Louis X’s song revisits Malcolm’s language, as well as the Supreme Wisdom, with the lyrics: “Why are we called Negroes? Why are we deaf, dumb, and blind?”

James Baldwin cites Farrakhan’s song in “Letter From a Region in My Mind,” paraphrasing the Nation’s decolonial critique of Christianity’s role in the conquest of Africa. The essay also weaves gospel lyrics into his description of Elijah Muhammad’s smile: “Take your burdens to the Lord and leave them there.” Just before the publication of the essay in 1962, James Cleveland and the Angelic Choir recorded the song in a live performance. In addition, the epigraph quotes the gospel song “Down at the Cross,” recorded that year by Willa Dorsey and her Mighty Faith Increasers. Baldwin compares the tone of Elijah Muhammad’s evangelical style to Christian sermons, a tone “as familiar to me as my own skin.”

Malcolm used gospel lyrics’ coded references to evoke the spiritual and religious dimensions of the struggle against racial injustice and for freedom, but in an Islamic framework rather than a Christian one. He claims the spiritual, gospel, and blues traditions for the Nation, testifying to what Carter Mathes calls the sonic dimensions of black political culture and historical memory “projected through the tonal memory of the music.” DuBois talks about “a dimly understood theology…a strange world of an unknown tongue”—“the singular spiritual heritage of the nation.” Malcolm, who read The Souls of Black Folk in prison, deploys gospel songs to evoke the slave past, but also an earlier history of an African and Asian Islam, before being “stripped of our name, our language, our culture, our God, and our religion,” as Farrakhan sang.