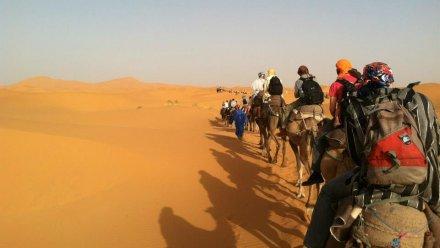 DUKE IN THE ARAB WORLD

An undergraduate study abroad program focused on religion, citizenship and governance in the modern Arab world.

On this program you’ll spend three weeks in each of Morocco’s two major cities, Fez and Rabat. The historic medina of Fez is one of the world's few remaining medieval cities and is considered Morocco’s cultural and spiritual capital—a must visit for any student of Arabic and Islamic studies. The metropolitan capital city of Rabat is one of the Arab world’s most modern cities. Located on the northwest Atlantic coast, Rabat has the second largest population in the country.

You’ll explore not only the sociopolitical development and intricacies of the Arab world, but also gain real life experiences through observation, field visits, and interaction with local scholars, students, and homestay families. The program exposes you to aspects of continuity and changes, commonalities and differences—all while creating opportunities to develop your Arabic language skills and cross-cultural competencies related to Morocco.

An undergraduate study abroad program focused on politics and culture.

On this six-week, two-credit program, students learn to critically analyze the political debates about Muslims and Islam in Europe and about refugees and immigrants from the Middle East. We will study the impact of Turkish inhabitants and culture in Germany in order to examine the shifting political landscape of Turkish-German identities and between Europe and the Middle East. The Arab experience in Europe will also be explored from the vantage point of North African communities as well as more recent arrivals from Syria and the Middle East.