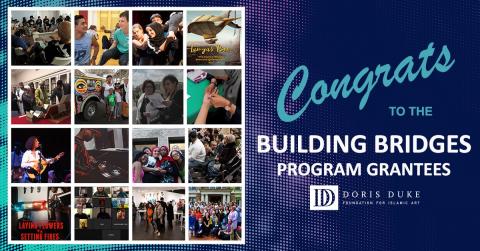 New York, April 29, 2021 – The Doris Duke Foundation for Islamic Art (DDFIA) today announced the 22 recipients of more than $4 million through the Building Bridges 2020 Grants Program. This national grant competition, which first launched in 2013, supports arts- and media-based projects working with U.S. Muslims to advance relationships and understanding among diverse communities. This year’s grants program is awarding approximately $1.6 million more than initially intended to the largest cohort in the program’s history in order to meet the moment of opportunity generated by increased social awareness of the need for strengthening equity and inclusiveness in our communities. “At a time when support for social justice movements is at a historic high, we recognize this as a transformative period to advance enduring change for a more equitable and inclusive society,” said Zeyba Rahman, senior program officer of the DDFIA’s Building Bridges Program. “To bolster collective momentum toward this vision and with the recognition that this work often requires time to bear fruit, we are excited to deepen our investment in previous grantees and expand our support to new grantees as well. It is fitting that we announce this new cohort during Ramadan, the Muslim month of contemplation, reconnection to core moral values and action to serve the greater good. We look forward to following our grantees’ projects as they thread these values into the fabric of communities across the nation.”

The organizations receiving funding through the Building Bridges 2020 Grants Program are:

• American University, The Center for Media & Social Impact (CMSI) in Washington, D.C. with a grant of $345,000 to support the “Yes, And... Laughter Lab,” a competitive incubation lab and pitch program codirected by CMSI and Moore + Associates, with the goal of elevating American Muslim and BIPOC comedy writers/performers;

• Art 120 in Signal Mountain, Tenn. with a grant of $89,700 to support “Jingle Truck in Cyberspace and Beyond,” the expansion of a mobile art project to share the culture and art of the Pakistani Jingle Truck;

• Art2Action in Tampa, Fla. with a grant of $57,500 to support the development of “Eleven Reflections on the Nation,” a national series of performance and digital works reflecting on the 20th anniversary of Sept. 11, 2001;

• ARTogether in Oakland, Calif. with a grant of $55,200 to support “Khamsa,” a visual and musical journey through the five stages of grief to highlight the stigmatization of mental health issues;

• Battery Dance Corporation in New York, N.Y. with a grant of $94,543 to support “Building Bridges Through Spoken Word and Dance,” a performance series featuring two Arab artists and “Dancing to Connect” workshops for refugee and non-refugee youth in Houston; • BoomGen Studios’ Starfish Accelerator Project in Los Angeles, Calif. with a grant of $345,000 to support the Starfish Accelerator, a creative intellectual property accelerator investing in original projects from mid-career BIPOC storytellers;

• California Shakespeare Theater in Orinda, Calif. with a grant of $108,100 to support the “Shahrazad Squad,” a collective of Bay Area-based Middle Eastern, North African, and South Asian women engaged in social change and finding resilience through story-sharing, and to grow this network by organizing similar cohorts in Ohio, Michigan, and Illinois;

• Duke University in Durham, N.C. with a grant of $201,250 to support “Building Bridges: Black Muslims in America,” part of an ongoing presentation and residency initiative by Duke Performances and the Duke Islamic Studies Center showcasing the cultural contributions of U.S.-based Muslim artists;

• El-Hibri Foundation in Washington, D.C. with a grant of $230,000 to support Public Narrative trainings, which will convene American Muslim and ally artists and cultural influencers, Black leaders and movement builders, mental health experts and frontline health workers, philanthropists and nonprofit leaders, and interfaith weavers and organizers;

• Free Library of Philadelphia Foundation in Philadelphia, Pa. with a grant of $101,200 to support “Manuscripts of the Muslim World,” a multi-faceted collaboration with Philadelphians who have cultural or spiritual connections to Islam, particularly Philadelphia’s Indigenous Black Muslim community, based on the Free Library’s rich Islamic collections of manuscripts and paintings;

• Friends of PBS Wisconsin in Madison, Wis. with a grant of $115,000 to support PBS Wisconsin and their project partners, the Milwaukee Muslim Women’s Coalition and the We Are Many - United Against Hate network, to use storytelling and community conversation as catalysts for learning, empathy and building bridges of understanding across diverse populations;

• Highlights Foundation in Honesdale, Pa. with a grant of $184,460 to support “The Muslim Storytellers Fellowship,” a two-year program providing direct support to 16 Muslim writers and illustrators to bring perspectives of U.S. based Muslims to the children’s publishing industry;

• Inner-City Muslim Action Network in Chicago, Ill. with a grant of $86,250 to support “The Sacred Cypher Creatives Artist Fellowship” program, which allows five artists a cohort experience doing work with IMAN leaders in Chicago or Atlanta at the intersection of culture, social justice and community;

• Jannus in Boise, Idaho with a grant of $189,750 to continue support for “The Refugee Speakers Bureau” by engaging youth in rich opportunities that help to expand future potential;

• Kartemquin Educational Films in Chicago, Ill. with a grant of $115,000 to support Colette Ghunim’s documentary, “Traces of Home,” which will focus on the journeys the filmmaker takes with her parents to find the ancestral homes they were forced to flee in Mexico and Palestine;

• MIPSTERZ in New York, N.Y. with a grant of $345,000 to support a multimedia, immersive art experience titled “ALHAMDU” that explores the concept of Muslim Futurism; • Old Town School of Music Inc. in Chicago, Ill. with a grant of $345,000 to support “Ojalá!,” a two-year project comprising eight full residencies and six mini-residencies for Muslim artists, produced in partnership with a diverse cross-section of community organizations and institutions;

• The Trust for Public Land in San Francisco, Calif. with a grant of $326,025 to support the implementation of outdoor, arts-based community-building programs in American Muslim communities in Washington and Minnesota, a project it will undertake with its partner Springboard for the Arts, American Muslim artists and place-based community organizations;

• Unity Productions Foundation in Silver Spring, Md. with a grant of $287,500 to support the “Unfold Your Own Myth” project, a workshop series that will leverage the power of story in overcoming trauma and loss among refugees, immigrants and Muslims;

• University of Iowa Center for Advancement in Iowa City, Iowa with a grant of $212,750 to support the expansion of the University of Iowa International Writing Program’s “Between the Lines: Identity & Belonging” project, an evidence-based program for helping Muslim and non-Muslim high school students rewrite their perspectives;

• University of Michigan-Dearborn's Center for Arab American Studies in Dearborn, Mich. with a grant of $95,807 to support the expansion of the “Halal Metropolis” project; and

• Young Audiences Arts for Learning New Jersey & Eastern Pennsylvania in Princeton, N.J. with a grant of $136,385 to support “United We Create,” a program offering performances, hands-on workshops, and teacher professional development for elementary-aged children to learn about Muslim cultures and artforms.