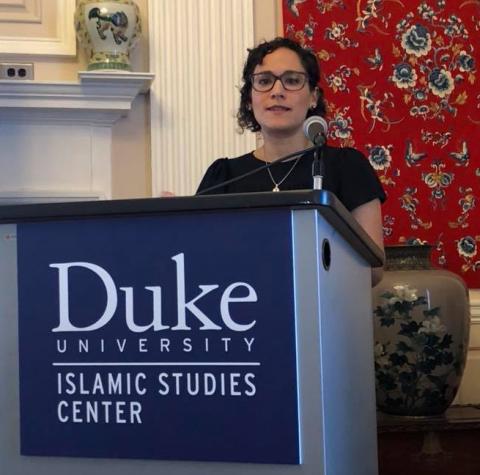 “After 1857, an imperial understanding of jihad linked and reduced Muslim actors and Muslim organizations to rebelling and violence, forcing them to consistently comment on issues like jihad.” – Dr. Ilyse Morgenstein Fuerst

On Thursday, September 6, members of the Duke and Durham community gathered in the Thomas Room of Lilly Library to engage with Dr. Ilyse Morgenstein Fuerst and her recent book. Dr. Morgenstein Fuerst is an Assistant Professor and Director of the Middle East Studies Program at the University of Vermont. Her work, After the Rebellion: Religion, Rebels, and Jihad in South Asia, seeks to demonstrate how the 1857 Rebellion in India shaped the understanding of Islam and Muslims in South Asia.

The talk opened with a warm introduction by DISC Director Dr. Omid Safi. He has mentored Dr. Morgenstein Fuerst since her undergraduate years, and praises her work for looking closely at a region which is often overlooked in discourse on jihad and Islam.

Morgenstein Fuerst began her presentation with a stated plan to “establish why we need a deeper read on rebellion; think about racialization, minoritization, and Muslims; offer evidence that the rebellion lingers as a touchstone of racialized religious identities; and conclude with thoughts on how and why [her] project fits into the broader Humanities Future Project.”

Before 1857, Morgenstein Fuerst explained, Muslims certainly may have been viewed as violent and fanatical, but it wasn’t posited as religious obligation (i.e. jihad). After the rebellion, the concept of jihad began to concern both European and South Asian writers. Previously held stereotypes were then codified into law and pseudoscience. To illustrate this shift, Morgenstein Fuerst showed the audience an 1858 documentary photograph by Felice Beato. The caption reads, “A mosque in Meerut where some of the rebel soldiers may have prayed.” Morgenstein Fuerst pointed out that this photograph’s wide availability and unquestioned caption lends authority to its claims. Its claim being, of course, that there is a solid connection between Islam and the rebellion.

But an 1870 fatwa stated that not only is jihad against the British Islamically impermissible, but that the question itself shouldn’t even be entertained. The fatwa was issued by a member of the elite Muhammadan Literary Society of Calcutta. British scholar W. W. Hunter dismissed these elite Muslims as not fully Muslim. He claimed that this fatwa would not be heeded by “real” Muslims, i.e. Indian Muslim masses.

Dr. Morgenstein Fuerst went on to explain how essentialist religious classifications, especially of Hindus and Muslims, became a hallmark of British Imperialism. The talk concluded with questions from the audience.

The Critical Islamic Studies Working Group is part of Humanities Futures, a 3.5-year grant initiative based at Duke’s Franklin Humanities Institute and supported by the Mellon Foundation. The project aims to explore the futures of the humanities disciplines in light of the interdisciplinary changes and development of recent decades, particularly amidst the heightened epistemological, methodological, and institutional shifts of the present moment.